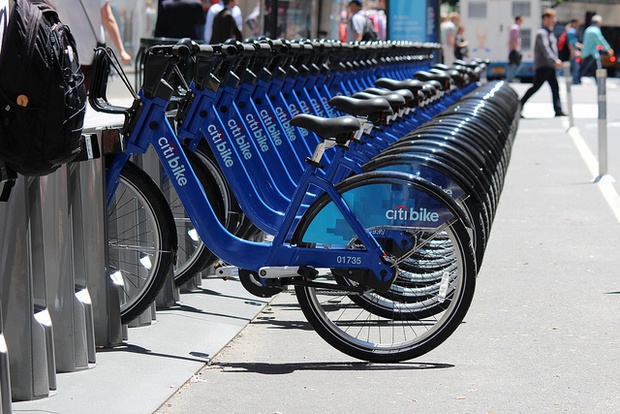 Over the past few days, several New York media outlets have reported that Citi Bike, the city’s popular but financially struggling bike-share system, will soon get a much-needed influx of cash. The new money would likely go toward improving docking stations and expanding the network to other parts of the city. A spokesman for Mayor Bill de Blasio told the Wall Street Journal that bike-share “has become part of our public transportation system, and there is a lot riding on its success.”

Those words come at the same time as a new research study—first referenced here by former D.C. and Chicago transportation chief Gabe Klein—offers the most persuasive evidence yet that bike-share serves as a genuine form of public transportation.

Past work has found that bike-share members decrease their car use considerably: According to one survey, 52 percent did so in Minneapolis, and 41 percent in Washington, D.C. The new, more fine-grained analysis of bike-share use in these cities reveals that its role in the transit system varies based on the character of the host city. In larger cities with dense cores like D.C., bike-share may replace shorter transit trips; in smaller, more dispersed cities like Minneapolis, it may expand the entire public transport network.

Berkeley researchers Elliot Martin and Susan Shaheen report the findings in an upcoming issue of the Journal of Transport Geography:

That’s the take-home message. For the study itself, Martin and Shaheen took a close geographic look at the changes in commute modes made by bike-share members in the two test cities. In Washington, a survey of more than 4,800 members found that 47 percent decreased their rail use (namely, on the D.C. Metro), primarily in the city center. This suggests that in a city like D.C., bike-share acts as a substitute for short rail trips—no doubt relieving crowded subway cars in the process.

← We Need to Think Bigger About Transit-Oriented Development (via CityLab) Lyft Hopes to Coax Commuters to Leave Their Cars (via The New York Times) →
IMR is an affiliate of The Transportation Sustainability Research Center - University of California, Berkeley